If you've 'been roaming around, always looking down at all you see', it's time to get your head up as the four-time Grammy award-winning American rock band, Kings of Leon, embarks on their When You See Yourself tour. "When You See Yourself", the band's eighth studio release, embraces their maturity and will to keep rockin' on. Performing live on stage at the Hollywood Casino Amphitheatre on Friday, 20th August 2021, get your rock game on as you'll surely jam to their timeless Grammy-award winning hits "Sex on Fire" and "Use Somebody". We know that you 'could use somebody to jam with, so book your tickets now and go 'off in the night, and live it up to jam to Kings of Leon's timeless rock anthems. 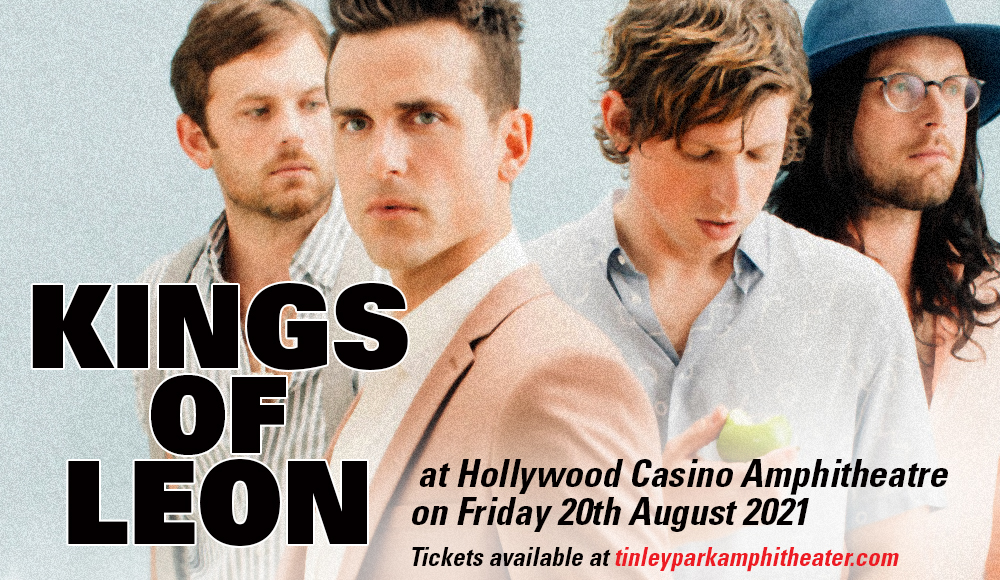 The band is made up of the Followill brothers, Caleb, Jared, Nathan, and their cousin, Matthew. From their humble beginnings in 2002, signing with RCA, having toured with the likes of U2, Bob Dylan, and Peral Jam, the brothers started to make waves in the rock scene.

The band skyrocketed to the charts with their fourth studio album, Only by the Night, that peaked at #1 on the UK Albums Chart and reached #4 on the Billboard 200. It featured the Grammy winning tracks "Sex on Fire" and "Use Somebody" peaking at the top of music charts. The brothers bagged Grammys for Record of the Year, Best Rock Song, and 2 Best Rock Performance by a Duo or Group with Vocal awards. Throughout their journey, they've been Grammy nominated for twelve times.

The brothers rocked on and released "Come Around Sundown", "Mechanical Bull", "Walls", and their latest studio album, "When You See Yourself", that marked history as the first album offered in the form of a non-fungible token (NFT) with three different special packages.

It's time to go off in the night, get it on fire, and rock hard with Kings of Leon. Book your tickets now!