Get ready for the biggest hip-hop show of the year!! Wiz Khalifa and Rae Stremmurd are joining forces for a MASSIVE North American tour, bringing them to the Hollywood Casino Amphitheater on Sunday 29th July – DON’T miss it!! Get your tickets NOW while you still have the chance! 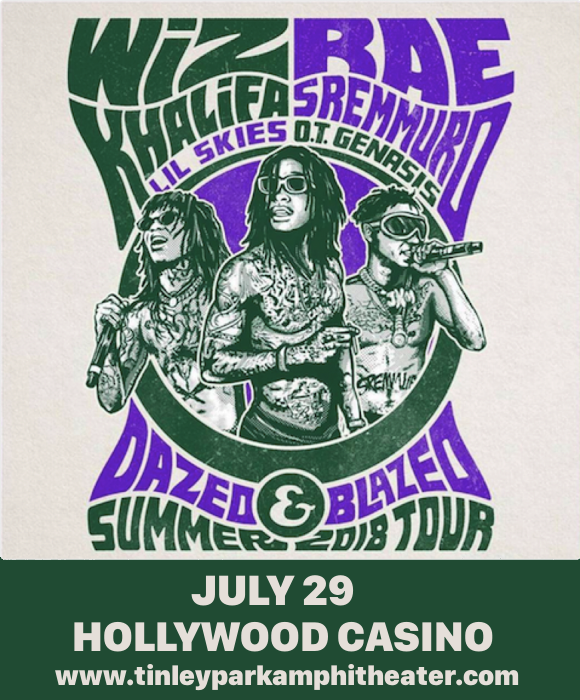 Cameron Jibril Thomaz, better known by his stage name Wiz Khalifa, burst onto the rap scene in 2006 with his debut critically acclaimed album “Show And Prove”. In 2008, he released the single “Say Yeah,” which received widespread urban radio airplay, charting on the Hot Rap Tracks and Rhythmic Top 40. Later he signed to Atlantic, with his first single for the label, “Black and Yellow,” hitting the number one spot on the Billboard Hot 100!! He’s about to put out an all-new album, entitled “Rolling Papers 2”.

As for Rae Sremmurd, they’re riding a wave of success that started in 2013 when they were signed to Mike Will Made It’s Eardrummers Imprint. From squatting in an abandoned house and organising parties to promote their music, they were put in touch with an established producer through a mutual contact and from there released their debut album “Sremmlife,” which has since earned Platinum certification from the RIAA.

Well, what are you waiting for?? Get ready to hear all the new material from these two massive rap artists live – book your tickets today, while they last!!