Are you ready for some music to get you high? Fresh from both a dope set at Coachella and dropping a brand new mixtape on 4/20, Taylor Gang rapper Wiz Khalifa is hitting the road on the Decent Exposure Tour, coming to Hollywood Casino Ampitheatre on Saturday 27th July 2019! Not only will he be treating fans to a full headlining set, but he'll be joined by French Montana, Playboi Carti, Moneybagg Yo, Chevy Woods, and DJ Drama in support! 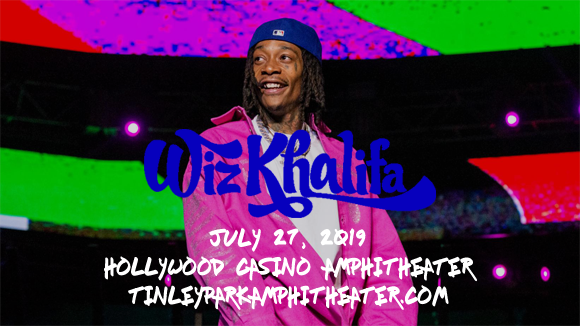 An instant success in the hip hop scene with the release of his 2005 mixtape Prince of the City: Welcome to Pistolvania, Wiz Khalifa is an American rapper and actor, hailing from Pittsburgh, PA. In 2006, Khalifa released his debut album, Show and Prove, which led to a major-label deal with Warner Bros. Records the following year. He found further success in 2009 when his single "Say Yeah", from the album Deal or No Deal, reached number 25 on the Billboard Rhythmic Top 40 music chart and number 20 on Billboard's Hot Rap Tracks. His mainstream breakthrough came when "Black and Yellow", his Atlantic Records debut from the album Rolling Papers (2011), peaked at number one on the Billboard Hot 100. Khalifa's next number one single was "See You Again" ft Charlie Puth, a tribute for actor Paul Walker from the soundtrack of the film Furious 7, which charted at the top position on the Billboard Hot 100 for 12 non-consecutive weeks. His latest release is the mixtape Fly Times, Vol. 1: The Good Fly Young.