Weezer & Panic! At The Disco Tickets

How do you like your pop-rock, nerdy or with a Vaudevillian flair? Either way you're in for a treat as two legendary underdog bands, Weezer & Panic! At The Disco, join forces for a co-headlining stint that promises to be the tour of the summer! Both promoting new albums, the bands are heading to Hollywood Casino Amphitheatre on Sunday 10th July, and with Andrew McMahon and the Wilderness in tow, it's gonna be one hell of a night! 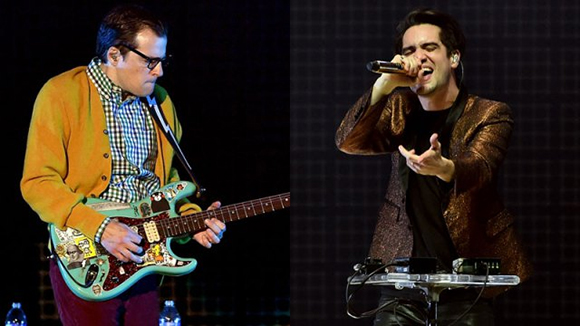 Panic! At The Disco are a Vaudevillian pop-rock band, who rose to fame in 2005 with the release of their debut album A Fever You Can't Sweat Out, which went on to be certified double platinum in the US. The album was fiercely championed by Fall Out Boy bassist Pete Wentz, who signed the band to his Fueled by Ramen imprint label Decaydance Records in 2004, making them the first on the new label. Their second album was a notable musical departure from the first, leaning more towards a 1960s rock sound. This was the catalyst for several changes in band personnel, and as of 2015, lead singer Brendon Urie is the only member of the official lineup. Panic! At The Disco's fifth studio album Death of a Bachelor was released worldwide on January 15, 2016.