Popular pop rock balladeers Train are back with the fantastic new album A Girl, A Bottle, A Boat, and to mark the release they're setting out on a mighty 45-date string of shows: the Play That Song tour! They will be joined by British pop songstress Natasha Bedingfield & 90s rockers O.A.R. when they take to the stage at Hollywood Casino Amphitheatre on Friday 30th June 2017, so get ready for night of fresh new tunes and singalong hits! 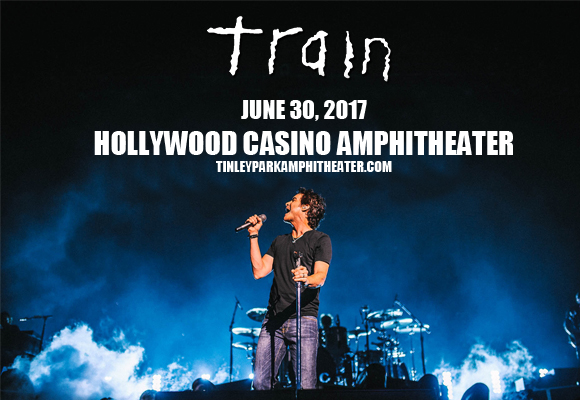 With over 10 million albums and 30 million tracks sold worldwide and over twenty years in the music industry, American roots rock band Train remain a staple of the touring circuit. Formed in San Francisco in 1993, the band have found themselves regularly climbing to the top of the charts with songs like two-time Grammy Award-winning single “Drops of Jupiter”, “Drive By” and RIAA 6x Platinum-certified international hit “Hey, Soul Sister”. The band's current lineup is as follows: Patrick Monahan (vocals), Luis Maldonado (guitar), Hector Maldonado (bass, vocals), Drew Shoals (drums), and Jerry Becker (keyboards, guitar), and occasionally founding member Jimmy Stafford (lead guitar). Their tenth, and most recent, studio album was released in January 2017.