The cusp of the millennium was a goldmine for radio wave dominating pop rock hits, and two of the era's most popular acts, Train and the Goo Goo Dolls, have now joined forces for co-headlining summer tour! Coming to Hollywood Casino Ampitheatre on Saturday 20th July 2019, the two groups will be performing of full set of singalong hits, including internationally popular classics like "Iris" and "Drops of Jupiter (Tell Me)"! Not only that, but there will be music from soul and R&B singer Allen Stone in support! 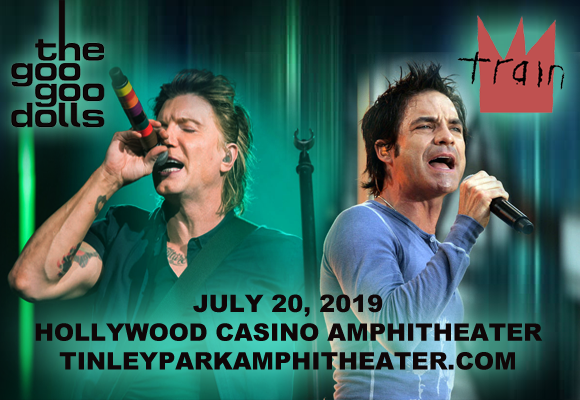 American rock band Train formed in 1993, in San Francisco, California. After a few years of performing together, the band were opening for the likes of Barenaked Ladies, Hootie & the Blowfish, Cracker and Counting Crows, and in 1996 they put themselves forward for signing with Columbia Records, but were unsuccessful. This rejection drove the band to self-release their debut album, Train (1998), independently. The album was a huge success, launching three singles, including the top twenty hit "Meet Virginia", and it brought Train worldwide fame, eventually receiving platinum certification from the RIAA. Their 2001 follow-up, the multi-platinum-selling Drops of Jupiter, fared even better, launching its two-time Grammy Award-winning lead single of the same name, which stayed in the US charts for over a year (54 weeks). The band has continued to have chart success throughout its career, with songs like the six-time platinum-certified hit "Hey, Soul Sister" (2009). The band's most recent release is a greatest hits album titled, simply, Greatest Hits, and released in 2018.