Country music legend Tim McGraw comes to Hollywood Casino Amphitheatre on Saturday 26th September 2020 on his Here On Earth Tour! The hugely popular performer is a seasoned professional whose tours are some of the highest-grossing live shows in country music, and with a back catalog of multi-platinum number-one hits, he always puts on a spectacular crowd-pleaser! This will also be McGraw's first solo show on the road in five years, so expect the multi-award-winning artist to be pulling out all the stops for fans! HE'll be joined for the evening by special guest support acts Midland and Ingrid Andress! 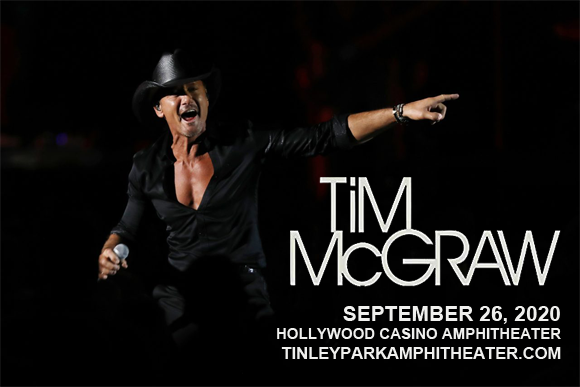 It took a little while for Tim McGraw to make his way in the world of country music – his 1991 self-titled album had relatively little impact on the scene. However, his 1994 follow-up, Not a Moment Too Soon, was a very different story – on the strength of its singles, the album topped both the Billboard 200 and Top Country Album charts and won McGraw two ACM Awards, as well as finishing the year as the top-selling country album. This was the breakthrough McGraw had been waiting for, and he rode high on the strength of the album's success, soon becoming a bona fide country star. In the 25 plus years since his breakthrough, McGraw has had a total of 10 number on albums on the Billboard Top Country Albums Chart, producing a prolific 65 singles, including 25 that have reached the top spot on the Hot Country Songs or Country Airplay charts, and three ("It's Your Love", "Just to See You Smile", and "Live Like You Were Dying") that have been rated by Billboard as the best-selling country songs of their year of release. In fact, McGraw's commercial success has been such that he's now one of the world's best-selling artists of all time, with over 80 million albums sold worldwide! He is also a multi-award-winner, having been honored with three Grammy Awards, 14 Academy of Country Music awards, 11 Country Music Association (CMA) awards, 10 American Music Awards, and three People's Choice Awards to date, among others. McGraw is also a hugely popular live act – his Soul2Soul II co-headlining tour with his wife Faith Hill was the highest grossing tour ever by a country artist until Taylor Swift's "The Red Tour" in 2014, and one of the top five grossing tours of any musical genre.