Music lovers get ready as The Doobie Brothers & Michael McDonald are heading to Hollywood Casino Amphitheatre on Sunday 29th August 2021! This coming Summer season, The Doobie Brothers are returning once again to the stages across North America in celebration of their 50th anniversary! Their lucky fans can now select tickets for their exclusive 2021 dates as they have been released… come and show your love for The Doobie Brothers by being a part of the special crowd for this one night only!! 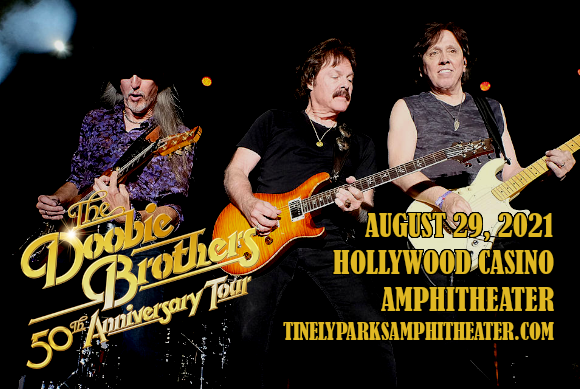 As one of California's most famous bands, The Doobie Brothers took over their local music scene all the way back in the early 1970's and have stayed at the top of their game ever since. With their ever-growing fan base, they transformed the mainstream charts with some of the biggest songs of all time and have now reached a whopping five decades in their career. As 2021 marks this triumphant year, The Doobie Brothers will be hitting the road to bring their dedicated fan base an unforgettable evening of pure joy and entertainment.

With an outstanding 40 million albums sold worldwide and still counting, The Doobie Brothers have kept a steady chain of hit singles and given the world some amazing songs throughout their main years between 1970 – 1975, their 1980's era and also their most recent creations, along with their upcoming fifty anniversary tour. It's an extra special year for The Doobie Brothers as they have been nominated for the 2020 Rock and Roll Hall of Fame.

If you love the iconic, unforgettable group The Doobie Brothers, then whatever you do – don't miss out on your lucky opportunity to be a part of their exclusive and rare performances this coming Summertime! Who knows when the chance will come around again! Don't wait to find out – book your tickets for The Doobie Brothers 2021 tour today!