The legendary one and only blues Rockers – The Black Crowes have dropped the exciting announcement of their upcoming live dates! This unique tour is like none other as they plan to celebrate thirty years since their debut album caught the world's attention. That's right, The Black Crowes are back to perform Shake Your Money Maker LIVE! Don't miss them as they come to Hollywood Casino Amphitheatre on Saturday 7th August 2021! Tickets are now available, but hurry – as they won't be around for long! 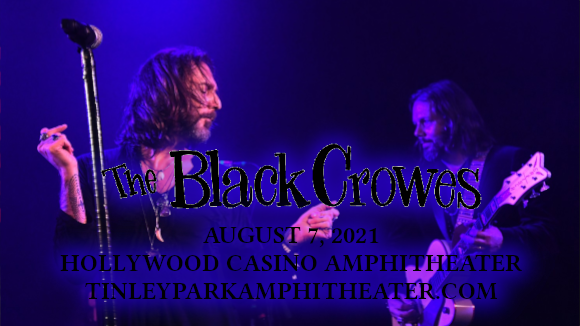 As one of rock and roll's greatest bands to come out of the 1980s decade, The Black Crowes transformed the music scene and paved way to a whole new era of sound. As they took to creating and performing music, The Black Crowes started their journey and have now released a huge collection of material to this day. With a much loved collection of their eight full length albums, along with live studio releases and successful chart topping singles, it's no wonder that The Black Crowes are still as popular as ever.

The band kick started their success by teaming up with Def American Recordings in 1989 and with help from the label, The Black Crowes were able to record and release their exciting first album for all to see. The record titled Shake Your Money Maker became a hit for the group and established them onto the mainstream scene as it included tracks such as "Hard to Handle," "She Talks to Angels," "Jealous Again," "Twice As Hard," "Sister Luck," and "Seeing Things." This release changed their career for many years to come as it gained multi platinum sales and has now become an iconic album for The Black Crowes.

Now fast forwarding three whole decades later in 2021, The Black Crowes are setting out to bring all of the songs from the record back to life and what better way to do that then to head out on an extensive tour with their beloved fan base! The Black Crowes will be embarking on a journey to celebrate the achievement this Summer/Fall and you can now officially grab the chance to be a part of it!

So whatever you do this concert season – grab your chance to be in the crowd, catching The Black Crowes live on stage, playing all of your favorite songs from Shake Your Money Maker, this once in a lifetime experience is not to be missed!