Smashing Pumpkins are back on the road this summer for another knock-out North American tour! Their 2019 stint sees the alt-rock icons team up with Oasis guitarist Noel Gallagher's High Flying Birds, bringing a co-headlining show to Hollywood Casino Ampitheatre on Thursday 15th August 2019! Joining these two bands of incredible indie pedigree will be special guests AFI in support! 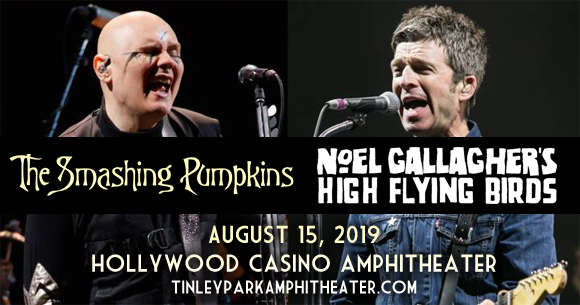 Formed in Chicago, Illinois in 1988, American alt-rock band Smashing Pumpkins became one of the most commercially successful and critically acclaimed bands of the 1990s. The group's second studio album, Siamese Dream (1993), was a breakthrough hit, debuting at number ten on the Billboard charts, and their 1995 follow-up found even greater success, debuting at number one and eventually gaining diamond certification from the RIAA. The album earned the band seven Grammy Award nominations in 1997, including Album of the Year and Record of the Year ("1979"), as well as 9 MTV Music Video Awards nominations, 8 of which were for the single "Tonight, Tonight", including "Video of the Year". To date, the band has old over 30 million albums worldwide. Their current line-up consists of Billy Corgan (lead vocals, guitar), James Iha (guitar), Jeff Schroeder (guitar) and Jimmy Chamberlin (drums).