Co-headlining rock tours don't get much better than this! Shinedown & Godsmack will be bringing the noise to Hollywood Casino Ampitheatre on Friday 27th July 2018 for an unmissable two-set hard rock extravaganza! Chock-full of exciting new material from their latest releases, this show will see both iconic bands giving fans a LOT of bang for their buck! Be there! 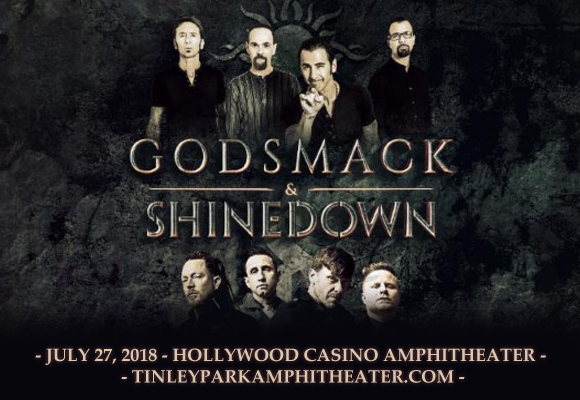 Godsmack is an American heavy metal band hailing from Lawrence, Massachusetts and formed in 1995. After gaining exposure through airplay on Boston radio station WAAF (FM), the band was picked up by Universal Records, signing with them in 1998 and releasing its self-titled debut with them later that year. By the following year, the album was certified gold by the RIAA and, following the success of their sophomore album Awake (2000), by 2001 it was certified quadruple-platinum. The band has released six studio albums to date, including three consecutive number-ones on the Billboard 200 (Faceless, IV, and The Oracle). The band's seventh studio album, When Legends Rise, will be released this year.