Led by their exhuberent and inimitable frontman, rock supergroup Sammy Hagar and the Circle give fans an unbeatable live experience whenever they perform – every show feels like seeing five bands in one with such a mighty back catalog to choose from, plus their chart-topping debut album of originals, released last year! That's why it's such a treat to have them joining British rock maestros Whitesnake for a double-headliner! It's a potent mix, and it's coming to Hollywood Casino Amphitheatre on Friday 14th August 2020! Also joining them will be Night Ranger in support! 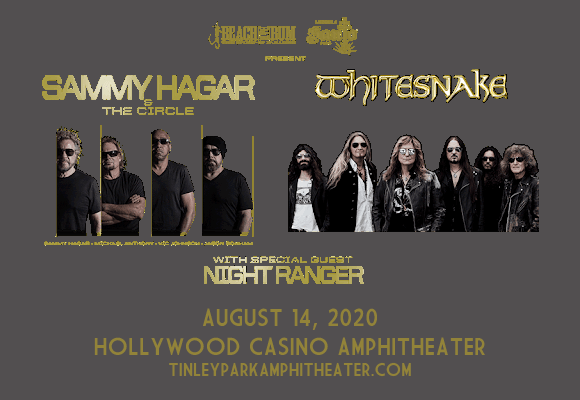 Whitesnake was formed by former Deep Purple vocalist David Coverdale in 1978, with several members of The White Snake band, who had backed him on his solo tour the previous year. They released two albums in the late 1970s, but had their breakthrough with Ready an' Willing (1980), which was the first of a string of four UK top ten albums for the group. 1984's Slide It In was also their first to chart in the US, earning double-platinum certification from the RIAA. The band's 1987 self-titled album was a huge success, going eight-times platinum in the US and reaching number two on the Billboard 200 for 10 non-consecutive weeks. It also produced two US hits: "Here I Go Again" and "Is This Love", which reached number one and two on the Billboard Hot 100, respectively. Slip of the Tongue (1989), continued their streak of success, hitting the top 10 in both the US and UK, and reaching platinum sales in both territories. After that, Whitesnake parted ways, but came together sporadically over the years, releasing Restless Heart – a one-off album – in 1997. The band officially reformed in 2002, and has since released four studio albums: Good to Be Bad (2008), Forevermore (2011), The Purple Album (2015) and Flesh & Blood (2019).