Sam Hunt is back! The phenomenal country artist, whose unique and modern spin on the genre saw him break several records with his 2014 debut album, Montevallo, comes to Hollywood Casino Amphitheatre on Saturday 20th June 2020! The singer will be performing from his long awaited second studio album, Southside, which has already launched several hits, including his Billboard smash "Body Like a Back Road!" No doubt fans will be hyped to hear new music from the star, and this is his first large-scale tour in a few years, so expect an electric atmosphere at what will be an unforgettable show! Plus, there'll be support from Kip Moore and Travis Denning! 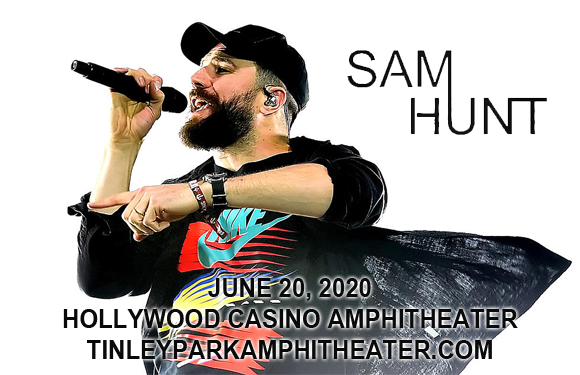 Sam Hunt's path to stardom has not been as straightforward as some – a promising football player, he was considering a professional sports career, before making the decision to move to Nashville in 2008 to pursue music. His first few years in the city were spent writing for other artists, and he had a huge hit as a co-writer for Kenny Chesney's number one single "Come Over," which won him an ASCAP Award. More hits followed with Keith Urban's "Cop Car" and Billy Currington's "We Are Tonight," and in 2014 he was signed to MCA Nashville as an artist in his own right. With MCA, he released his debut studio album, Montevallo, later that year. The album's lead single, "Leave the Night On", peaked simultaneously on the Hot Country Songs and both the Canadian and US Country Airplay charts, making Hunt the first country artist in 22 years, to reach the top of three country charts simultaneously in the Nielsen SoundScan-era. The album launched five singles that broke several chart records, including three consecutive Hot Country Songs chart and four Country Airplay chart number ones. In 2017, Hunt released his biggest single of his career, "Body Like a Back Road," which reached number 6 on the Billboard 200, and will appear on his 2020 second studio album, Southside. He has won several awards since his debut, including one American Music Award, and one CMT Music Award, and he have received nominations for Billboard Music Awards and Grammy Awards.