Few singers in the music industry have enjoyed as much success and longevity as British rock artist Rod Stewart! Responsible for a wealth of hits throughout his career, which has spanned over 50 years, Stewart has earned no end of honors for his contributions to music, including a knighthood! Now, the archetypal showman comes to Hollywood Casino Amphitheatre on Saturday 16th July 2022 (Rescheduled from Wednesday 21st July 2021) for a night of classic tunes and razzle dazzle! Expect hit after hit from Stewart, and also from his special guest support act, fellow Rock and Roll Hall of Fame inductees Cheap Trick! 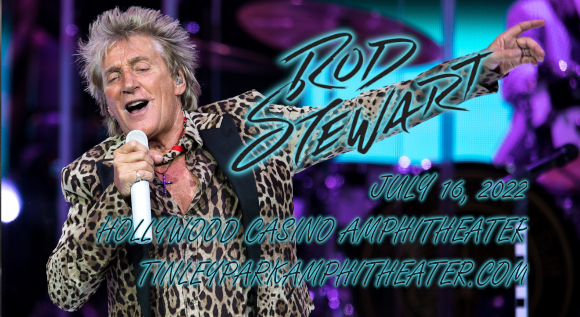 With a staggering 120 million albums sold globally throughout his unparalleled career, British singer, songwriter and musician Rod Stewart is one of the world's best-selling music artists of all time. Stewart began his career as a busker, playing harmonica and singing on the streets of Europe throughout the early-1960s, before lending his talents to two little-known bands: The Dimensions, and Long John Baldry and the All Stars. The latter part of the decade brought Stewart fame when he joined two more bands – The Jeff Beck Group, and the Faces – and embarked upon a solo career, releasing his debut studio album, An Old Raincoat Won't Ever Let You Down, in 1969. Both as a respected solo artist and as a member of various different groups, Stewart has racked up an incredible nine number one albums on the UK Albums Chart and 62 UK hit singles throughout his career, including 31 top 10 hits and six number ones, as well as 16 top 10 singles in the US, including four Billboard Hot 100 number ones. He has been honored throughout his career by several prestigious organisations, including two inductions to the Rock and Roll Hall of Fame (once as a solo artist, in 1994, and as a member of the Faces in 2012) and the UK Music Hall of Fame. He was knighted for his charity work and his service to music in 2016.