Get ready for one of the biggest events in hard Rock music as Rammstein comes to Hollywood Casino Ampitheatre on Tuesday 27th June 2017! Rammstein are embarking on tour for Summer 2017 but this is just a short collection of shows so fans are encouraged to grab the chance while they can! As one of the few dates – tickets are already selling fast! Book yours for an insane night!! 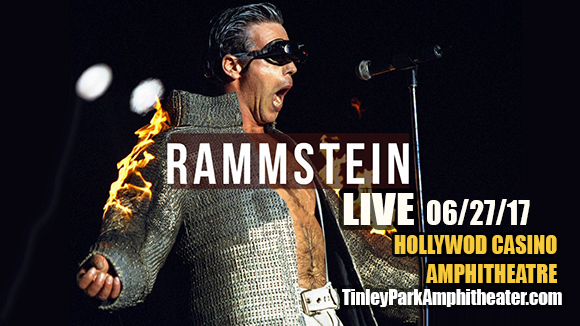 Despite most of Rammstein's material being written in German, this has not held them back, their music has become over the last 22 years, a global success! With a push from their label, Universal Music Group, these guys are unstoppable and have sold an impressive total of over 35 million albums worldwide! Seeing Rammstein live cannot be described, filled with out of this world theatrics, light shows, exploding displays, costumes and plenty of surprises. Don't miss them – 2017 is going to be huge!