Pop-rock superhero and aerial queen Pink comes to Hollywood Casino Amphitheatre on Saturday 9th September 2017, bringing you a show like nothing you've ever seen! Known for her spectacular, high energy shows, the "So What?" superstar will be performing songs from her upcoming album, as well as some of her classic hits! Tickets on sale now! 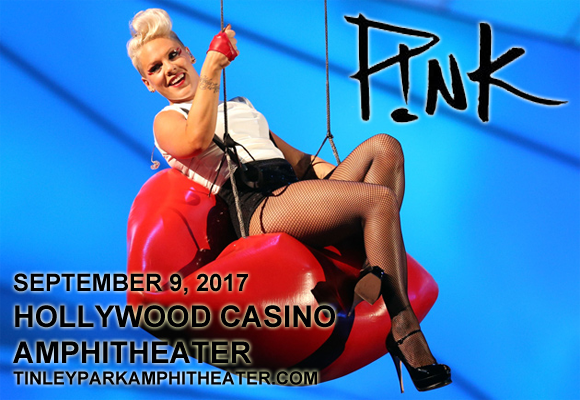 American singer, songwriter, dancer, aerial artist and actress Pink is best known for her hit singles “There You Go”, “Most Girls”, “Lady Marmalade”, "Get the Party Started", "Don't Let Me Get Me", "Just Like a Pill", “So What”, “Raise Your Glass”, "Blow Me (One Last Kiss)", "Try", and "Just Give Me a Reason". Pink began her music career as part of the R&B girl group Choice, signing her first record contract in 1995. She later went solo, releasing her double-platinum debut album Can't Take Me Home in 2000. To date, she has sold over 47 million albums worldwide, including over 16 million albums in the United States, and has received many awards throughout her career, including: three Grammy Awards, a Brit Award, a Daytime Emmy Awardand seven MTV Video Music Awards (including the Michael Jackson Video Vanguard Award). She received the BMI President's Award for "her outstanding achievement in songwriting and global impact on pop culture and the entertainment industry" at the 63rd BMI Pop Awards in 2015.