Metal fans are you in for a treat this Summer as Megadeth & Lamb of God will both be coming to Hollywood Casino Amphitheatre on Thursday 9th September 2021 (Rescheduled from Friday 6th August 2021)! The news has just dropped as one of the biggest co-headline tours of the entire year takes place in 2021 with two of the most epic bands from the Thrash Metal scenes! Both are legendary and cannot be missed – get your tickets to be a part of the crowd! 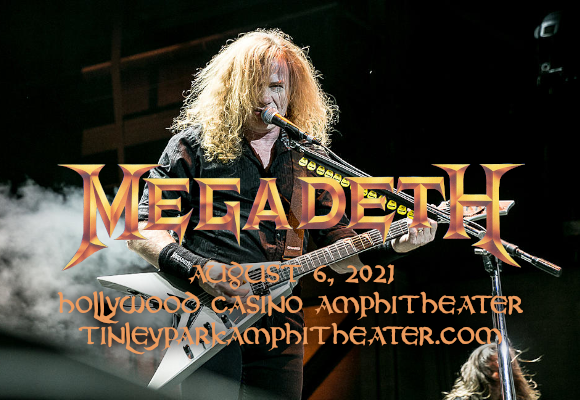 Two of the biggest Metal bands to walk the earth are coming LIVE this summer on a very special tour and fans around the world have been rushing to get their hands on tickets for these exclusive dates – Megadeth & Lamb of God will be coming LIVE!

As one of the most legendary bands out there within the Metal genre, Megadeth transformed the music scene during the 1980s and continued to impress throughout their long standing career. With countless of flawless rock albums, Megadeth have had a long line of successful releases from their first initial record Killing Is My Business… and Business Is Good! To their first official album release on a label, Peace Sells… but Who's Buying? But they didn't stop there, Megadeth received major success for their 1990 album, Rust in Peace and Countdown to Extinction (1992) – both of which received a platinum accreditation!

As another group that have inspired the masses, Lamb of God have also become pretty iconic for their major influence across the American Heavy Metal scene. As they made their mark on music history with their 90s releases, Lamb of God quickly became one of the biggest and best around and their worldwide status has stayed the same ever since. So it's no wonder that their tours are still as ever as popular today. With their work creating sales of over two million in the United States alone, along with a global following, Lamb of God have given it their all!

If you love Metal or know of someone who is a fellow huge fan then be sure to head on down for one of the biggest dates of the entire year as two of the greatest bands come to perform all of their most memorable anthems at Hollywood Casino Amphitheatre this July! There's no time to wait as one of the highest anticipated tours of 2021 – Megadeth & Lamb of God are bound to sell out! Get your tickets before it's too late!