Matchbox Twenty return to the stage for the first time since 2017! The band previously reunited for the "A Brief History of Everything" tour to mark the 20th anniversary of their RIAA Diamond-certified debut album Yourself or Someone Like You. Now, they're back on an extensive 50-date stint that comes to Hollywood Casino Amphitheatre on Sunday 6th August 2023 (Rescheduled from Sunday 7th August 2022) (Rescheduled from Friday 27th August 2021), where they'll be performing a set of all their biggest tunes! The alt-rock superstars will also be joined for the night by fellow alt-rock band The Wallflowers in support! 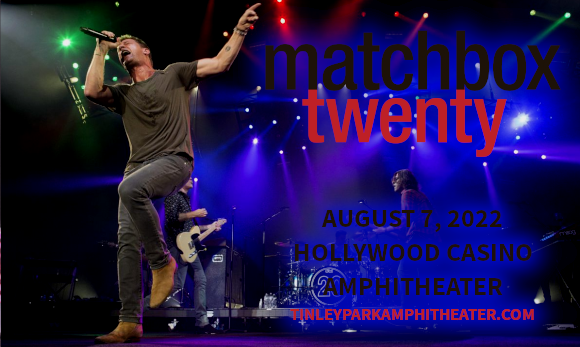 A continuation of the legacy of Orlando band Tabitha's Secret, Matchbox Twenty was formed in 1995 by vocalist and piano player Rob Thomas, bass guitarist Brian Yale, drummer Paul Doucette, lead guitarist Kyle Cook and rythm guitarist Adam Gaynor. It didn't take long for the group to find huge success within the industry, both critcally and commercially: their 1996 debut album was a mainstream hit, certified 12-times platinum (diamond) in the US and multi-platinum in Australia, Canada, and New Zealand. Similar success followed with their second and third albums, Mad Season (2000) and More Than You Think You Are (2002), which both launched hit singles and were certified quadruple-platinum and double-platinum, repectively. The band have endured a number of changes in personnel over their career, and have embarked on a few hiatuses over the years, due in part to the success of three-time Grammy Award-winner and frontman Thomas' solo career. The band reconvened in 2012 to release a fourth studio album, North, which debuted at number one on the Billboard 200, and in 2020 they are enjoying a revitalized career once again.