It's time to get in hear for some serious nostalgia as two of the hottest bands of the 1990s head to Hollywood Casino Ampitheatre on Friday 6th September 2019 as part of a truly awesome co-headlining tour! Alt-rockers Live and Bush have joined forces for the 25th anniversary of their two breakthrough albums, Throwing Copper and Sixteen Stone! Joining them will be Canadian alt-rock group Our Lady Peace!

“We are thrilled to be touring this summer with LIVE,” says BUSH frontman Gavin Rossdale. “The wealth and depth of songs from both bands should provide a great night of music. Looking forward to seeing you all this summer.”

“Bush is a great band and Gavin is a super passionate singer and performer. I’m really looking forward to spending the summer with them,” said +LIVE+ frontman Ed Kowalczyk. “I know the fans are going to get one hell of a show.” 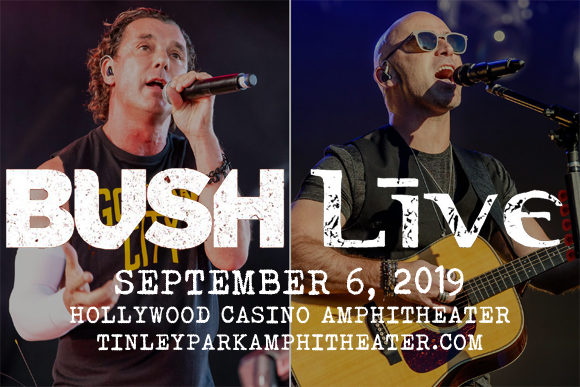 Pennsylvania rock band Live first found mainstream success in 1994 with the release of their global smash hit album Throwing Copper, which sold eight million copies in the U.S. alone. Consisting of Ed Kowalczyk (lead vocals, rhythm guitar), Chad Taylor (lead guitar, backing vocals), Patrick Dahlheimer (bass), and Chad Gracey (drums), the band formed in 1984 and released two albums before their international breakthrough. "Lightning Crashes", which stayed at the top of the Billboard Hot Mainstream Rock Tracks chart for 10 consecutive weeks and the Modern Rock Tracks (now Alternative Songs) chart for nine weeks, was one of a string of hit singles for the band throughout the 1990s. To date, the band has released nine albums, and has sold over 20 million copies worldwide.