"You want it all, but you can't have it…" Well, metal fans – turns out, you actually can! In an absolute insane turn up for the books, Korn is hooking up with Faith No More for the metal co-headliner of the year! Bringing the show to Hollywood Casino Amphitheatre on Tuesday 15th September 2020, the two iconic acts will be blasting out their biggest and best tunes to give fans the night of their lives! The two mighty musical forces will perform back-to-back, and they'll be joined by an incredible support line-up: fellow alt-metal act Helmet, and Atlanta noise-punk duo '68! 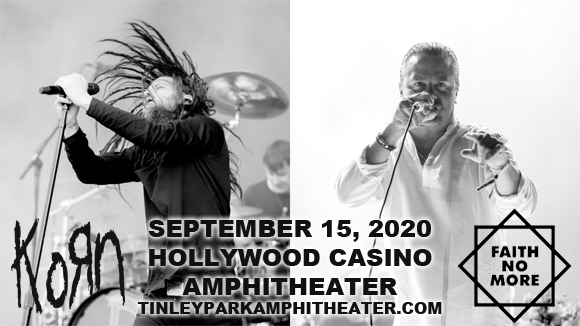 Originally a funk metal band going by the name of L.A.P.D., Korn began in Bakersfield, California in 1993, when vocalist Jonathan Davies met guitarists James "Munky" Shaffer and Brian "Head" Welch, bassist Reginald "Fieldy" Arvizu, and drummer David Silveria (who was replaced by Ray Luzier in 2007). The band's relentless tour schedule and unique take on metal, which combined elements of hip hop, funk, and grunge, meant its 1994 self-titled debut album started to gain traction and by the time the band released its second studio album, 1996's Grammy Award-nominated Life Is Peachy, it had begun to make waves in the metal scene and inspire the nu-metal movement. The group's 1998 album, Follow the Leader, was a bona fide smash hit and reached number one on the Billboard 200 – as did its follow-up, Issues (1999). Over the years, Korn's first seven consecutive studio albums have been certified platinum or higher, and 12 of the band's albums have charted within the top 10 of the Billboard 200, including eight that reached the top five. The group has also won two Grammy Awards and to MTV Music Video Awards to date. In 2019, the group released its most recent studio album, The Nothing.