Kiss: the End of the Road World Tour Tickets

Are you ready Hollywood? For tonight you are going to be Rocked! Kiss bring you the End of the Road World Tour! At Hollywood Casino Amphitheatre on Saturday 12th September 2020. The very final tour buy this legendary band buy your tickets now and become a part of KISStory! Kiss have reached the end of the road and this is it, one last tour to go out with a BANG! 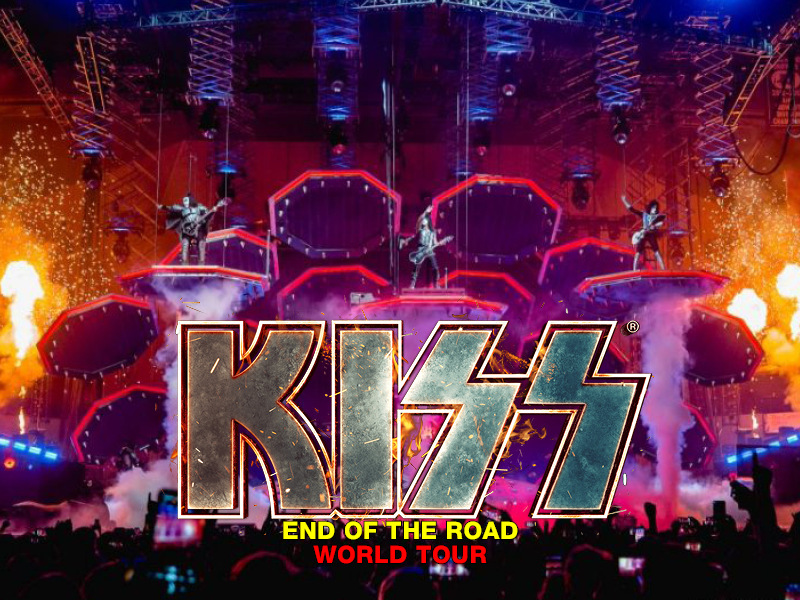 Kiss the hard-rock, shock-rock, heavy-metal band formed in 1973 and inducted into the Rock and Roll Hall of Fame in 2014, one of the best-selling bands of all time, having sold more than 75 million records worldwide, including twenty-five million RIAA-certified albums. Kiss also holds the title as America's number one Gold record award-winning group of all time, having earned thirty Gold albums. Kiss has fourteen Platinum albums, with three albums being multi-Platinum. The current members are Paul Stanley playing rhythm guitar, Gene Simmons playing bass guitar, Eric Singer on drums and Tommy Thayer playing lead guitar. Well known for its members' face paint and stage outfits, the group rose to prominence in the mid-to-late 1970s with their elaborate live performances, which featured fire breathing, blood-spitting, smoking guitars, shooting rockets, levitating drum kits, and pyrotechnics. The band are famous for their iconic make-up designs each of which represents a different character/persona. The current lineup consists of the original 4 designs the "Starchild", the "Demon", the "Spaceman" and the "Catman". The band formerly included a practice of giving any new members a new persona such as "The Fox" for Carr and "The Ankh Warrior" for Vincent. This practice was however ended after Singer and Thayer took up Frehley's "Spaceman" and Criss's "Catman" personas.
"a commercially potent mix of anthemic, fist-pounding hard rock, driven by sleek hooks and ballads powered by loud guitars, cloying melodies, and sweeping strings. It was a sound that laid the groundwork for both arena rock and the pop-metal that dominated rock in the late 1980s." – Stephen Thomas, Kiss Biography.