Join the Kidz Bop Kids as they take to Hollywood Casino Amphitheatre stage on Sunday 22nd August 2021 for Kidz Bop Live! A fun, colorful concert experience, where the Kidz Bop Kids perform all the latest Kidz Bop songs, Kidz Bop Live is a show that will get everybody moving! This year's show is gonna feature songs from Kidz Bop 39 and 40, like "Old Town Road", "Sucker", "Thank U, Next" and "Shallow!"

"We're proud to create an environment at our KIDZ BOP live shows that kids and families will enjoy together, whether it's your child's first concert or an annual family tradition." 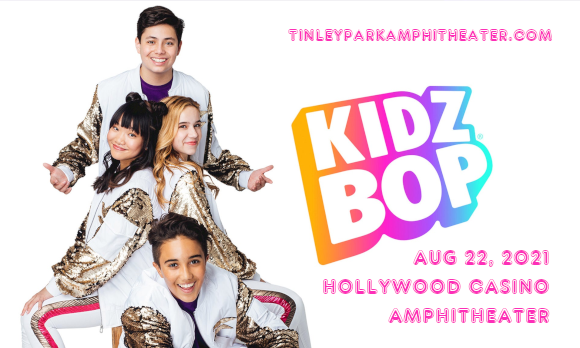 Bringing families together via music since 2001, Kidz Bop is the brainchild of Razor & Tie co-founders Cliff Chenfeld and Craig Balsam. The Kidz Bop Kids are a team of talented children who perform a selection of the most recent chart hits on albums released by Kidz Bop – the franchise has released over 40 main albums to date! They're crazy popular too – The Kidz Bop Kids were Billboard's No. 1 Kids' Album Artist of 2010, 2011, 2012, 2013, 2014, 2015, 2016 and 2017, and in 2015,  Billboard Magazine announced that the Kidz Bop Kids rank at number four on their list of artists with the Most Billboard 200 Top 10 Albums of all time! That's higher than Madonna and Bruce Springsteen!