The original redneck pimp, Kid Rock, comes to Hollywood Casino Ampitheatre on Saturday 5th October 2019 as part of his Hot October Nights Tour! The swaggering hip hop superstar will be joined by country legend Hank Williams Jr, for a night of country music with attitude! Expect wall-to-wall hits and second-to-none showmanship from these two professional renegades! 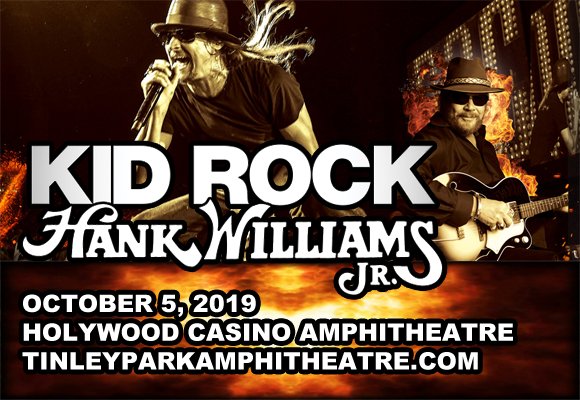 In the 1980s, American singer, songwriter, rapper, musician, record producer and actor Kid Rock took his first steps towards a rap career, as a member of hip hop group The Beast Crew. After catching attention of Insane Clown Posse producer Mike E. Clark and recording a demo with him, he became embroiled in a bidding war between six major labels, eventually singing with Jive Records. He released his debut album, Grits Sandwiches for Breakfast, in 1990, but it was the rap-rock fusion of his fourth studio album, 1998's Devil Without a Cause, that brought Kid Rock international fame. The album announced his highly-influential signature sound to the masses, and was eventually certified eleven-times platinum by the RIAA with the help of its lead single, "Cowboy", which is considered by AXS to be the first in the country rap genre. His eleventh, and most recent, studio album is 2017's Sweet Southern Sugar.