The rumors have been confirmed to be true! The blues inspired singer/songwriter – John Mayer is hitting the road for his "The Search For Everything" tour… Get ready to catch him as he brings his incredible talent to the Hollywood Casino Ampitheatre on Saturday 2nd September 2017! 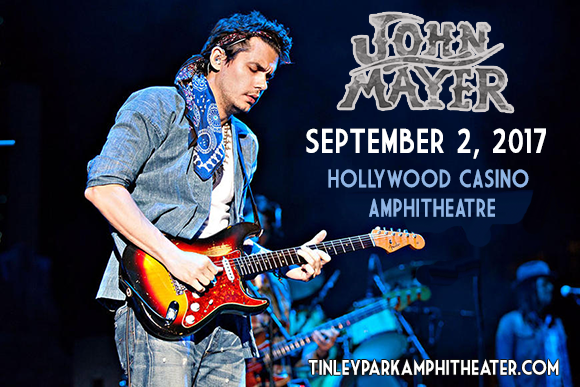 Talent such as John Mayer, only comes around once in a blue moon. As his countless awards will show, Mayer has proven that he has great songwriting abilities, he has gained recognition and respect all around the globe from industry, fans and musicians alike.

Starting off his career as a guitarist first, John began listening to the likes of the legendary; B.B King and Eric Clapton. Both of which he would later perform with. It was clear from early on that he would walk in similar footsteps as his skills transformed over time with sultry solo's that the notes in all the right places. Match this with raw and emotive lyrics and you have the artist that we now know and adore.
John Mayer has written endless successful hit songs such as; "Gravity" "Daughters" "Slow Dancing In a Burning Room" "I Don't Trust Myself" and "Your Body Is a Wonderland"… plus many more!