Jason Aldean is ACM's "Artist of the Decade" and with good reason – the country hit-maker has charted a bevvy of number one singles throughout his 15 year career, with no signs of slowing down any time soon! Aldean always brings the party when he hits the road, and this year he's headed to Hollywood Casino Amphitheatre on Saturday 22nd August 2020 on the We Back Tour! The tour is named after the lead single from last year's album, 9, and he'll be playing tracks from the hot LP when he takes to the stage! He'll be joined by special guest support acts Brett Young, Mitchell Tenpenny & Dee Jay Silver! 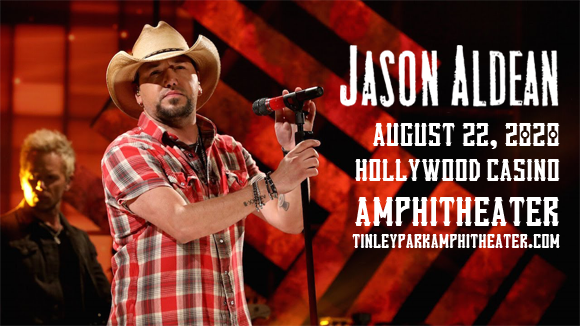 Jason Aldean is an artist who truly knows the value of hard graft. Raised in Macon, Georgia, he realised from an early age that he was destined for a life of music, and even turned down an athletic scholarship for college to pursue a career as a singer and songwriter. Years of touring the Georgia music scene followed, with his father acting as booking agent, before he eventually got what seemed to be his big break in 1998. Signed to Warner-Chappell, he moved to Nashville to make a start on his debut album. However, things didn't turn out as planned and it would take another seven years (and two more record contracts) before he finally got the recognition he deserved with the release of his platinum-selling self-titled debut (2005). Since then, he has become a true country star, and is one of country music's top-selling artists, having released seven albums that have been certified platinum or higher, and an incredible 21 number one singles!