A reunited Heart is back on tour after a three-year hiatus! The Love Alive Tour (named after a track on their 1977 album Little Queen) comes to Hollywood Casino Ampitheatre on Thursday 11th July 2019, and it promises a night of classic Heart hits and an incredible support line-up! Joining the Wilson sisters as special guests will be country-rock artist Sheryl Crow and British singer-songwriter Lucie Silvas! 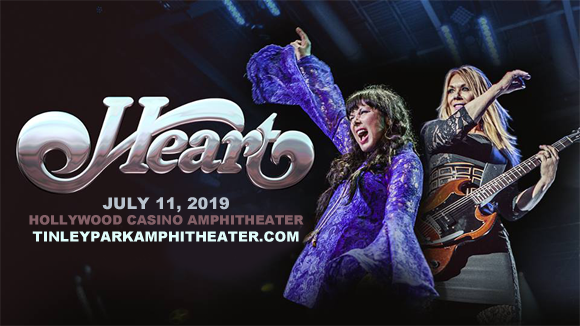 Driven by the creative pairing of sisters Ann Wilson (lead vocals, flute and guitar) and Nancy Wilson (guitar, mandolin and vocals), American rock band Heart have been responsible for a plethora of enduring rock anthems. With seven top 10 albums to date, hitting the charts in the 1970s, 1980s, 1990s, and 2010s (the longest span of top 10 albums by a female-fronted band), and 20 top 40 singles (including “Alone”, “Barracuda”, “Crazy On You” and “These Dreams”, among others), remains a truly iconic band and a radio staple. Heart was recognized by the Rock and Roll Hall of Fame as the first female-fronted hard rock band upon their induction in 2013. The band has sold more than 35 million albums worldwide since its inception, with over 22.5 million in album sales in the U.S., and has been nominated for four Grammy Awards.