Broadly regarded as one of the greatest rock bands of all time, Foreigner are unmatched in their sheer number of anthemic rock hits like “Juke Box Hero,” “Cold As Ice,” “Hot Blooded,” “Waiting For A Girl Like You,” “Feels Like The First Time,” “Urgent,” “Head Games,” “Say You Will,” “Dirty White Boy,” “Long, Long Way From Home” and the global number one smash hit, “I Want To Know What Love Is”! Now, the inimitable group comes to Hollywood Casino Amphitheatre on Friday 31st July 2020 on the Juke Box Heroes Tour, bringing fellow rock giants Kansas & Europe along for the ride as very special guest support acts! 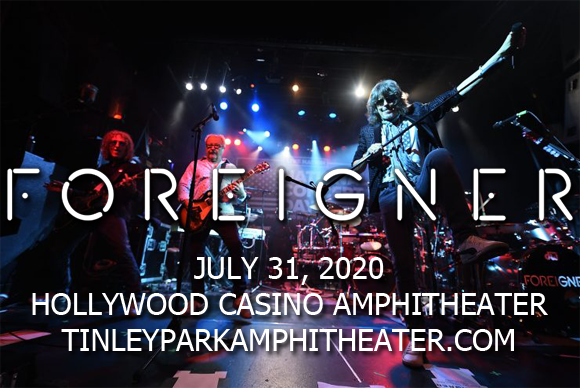 Raising the bar for rock acts everywhere, Foreigner burst onto the scene in 1977 with their self-titled debut album, which married the loud, bombastic nature of hard rock with the singlong choruses of pop to create a new sound that changed the landscape of music. They continued to release anthem after anthem over the years, eventually accruing 16 top 30 hits in the US. The band's albums also proved to be hugely popular, with their first six consecutive records gaining multi-platinum certfication from the RIAA (10 of their albums in total are multi-platinum-sellers), and with over 80 million records sold worldwide to date, they are now one of the world's best-selling music groups of all time!