Metal fans get ready!! The Hollywood Casino Ampitheatre is proud to present Five Finger Death Punch and Breaking Benjamin on Wednesday 29th August 2018!! They’re joined on their huge co-headlining North American tour by phenomenal support acts Nothing More and Bad Wolves!! Don’t delay, as tickets are expected to sell out FAST – grab yours NOW while you have the chance!! 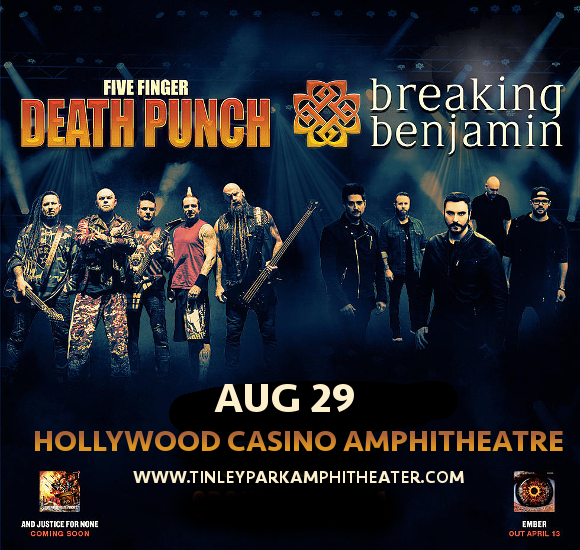 “Embers,” is the new album by Breaking Benjamin, featuring the single “Red Cold River” – which has already reached streams of over five million and is climbing to take the number one spot on Active Rock – listen to it below! Five Finger Death Punch’s new album, “And Justice For None,” comes soon after “Got Your Six,” released in 2015, with the band reportedly taking very little time before commencing work on the follow-up album. “We’re workaholics, we went right back in the studio,” said guitarist Jason Hook. “Every time we talk about taking a break it just doesn't feel right. Sitting around it just feels like we could be doing something. We're always concerned that we might lose momentum or that people will stop caring. I think we're overachievers by nature.”

Are you ready to experience all the brand new material live?? We sure are!! Grab your tickets today to be sure of your place at the show on August 29th!!