For country megastar Dierks Bentley, putting together a world-class arena/amphitheatre tour is getting to be water off a duck's back! This year, the singer is bringing Jon Pardi & Tenille Townes along for the ride, and it looks to be one of his best shows yet! The Burning Man Tour comes to Hollywood Casino Amphitheatre on Saturday 1st June 2019 – make sure you get your tickets! 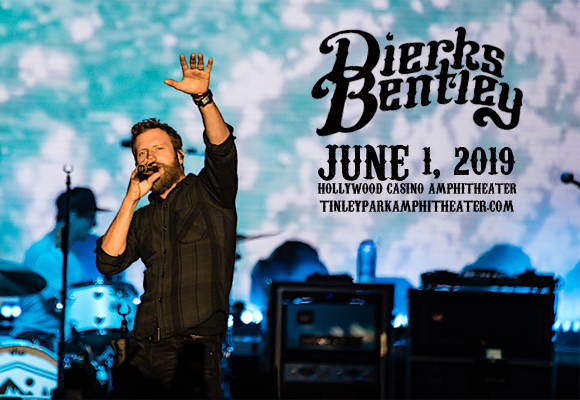 Since his wildly successful debut in 2003, Country singer and songwriter Dierks Bentley has charted sixteen number-one singles and six top five hits on the Hot Country Songs and Country Airplay charts, and has received fourteen Grammy Award nominations. Signed to Capitol Nashville in 2002, Bentley's self-titled first album peaked at number four on the Billboard Top Country Albums chart and number 26 on the Billboard 200, and was certified platinum by the RIAA, after selling over one million copies. Since then, he has released nine studio albums (including 2010's Up On the Ridge, which issued his usual country rock sound for a vintage bluegrass feel) and a greatest hits compilation album – Greatest Hits/Every Mile a Memory 2003–2008. His most recent release was 2018's The Mountain.