Dave Matthews Band fans, are you ready for another year of incredible live performances from the leading group in jam rock? The Dave Matthews band are headed to the Hollywood Casino Ampitheatre on Wednesday 3rd July 2019 as part of this season’s North American tour. If previous shows are anything to go by, those tickets will sell out fast – grab ‘em while they last!! 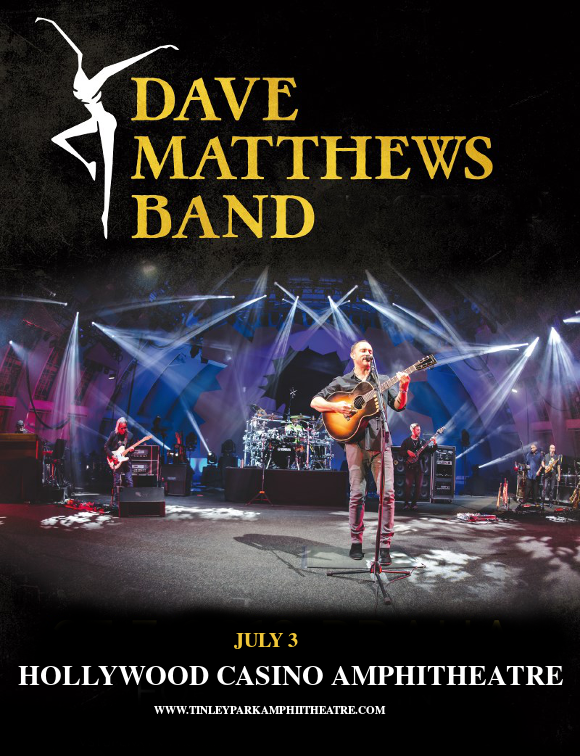 Formed in 9991, the Dave Matthews band is currently comprised of Dave Matthews and additional band members Carter Beauford, Stefan Lessard, Tim Reynolds, Rashawn Ross, Jeff Coffin, and Buddy Strong. With a constantly evolving cast of touring musicians, led by core member and songwriter Dave Matthews, there are so many factors in flux that seeing a Dave Matthews Band live show is never the same experience twice. That’s why fans go back to see them over and over again!

"We're gonna play some new songs, and then we'll play old songs, because you can't just play new songs, because then it would start getting boring, because you kinda change it all the time,” was the singer’s explanation when asked about the live performance structure of the tour up ahead. “Because it's a relief, you know? To be able to have a lot of songs to choose from.”

At this show, fans can expect to hear songs from across Dave Matthews’ career, each with a new spin on it. Seasoned Dave Matthews fans know what it’s all about – and those just joining them have a real treat ahead! What are you waiting for?? Get those tickets today!!