There's no rest for the talented, and that's particularly the case for country duo Brooks and Dunn! The twosome retired in 2009, only to return to the stage in 2015 for a hugely popular residnecy with Reba McEntire. Now, they're hitting the road together for the first time in a decade, and they're bringing their triumphant comeback tour to Hollywood Casino Amphitheatre on Saturday 19th September 2020! It's obvious these veteran performers just can't keep away, and boy are fans glad – expert showmen with a back catalog of some of the best country hits ever released, they are a must-see lvie act! 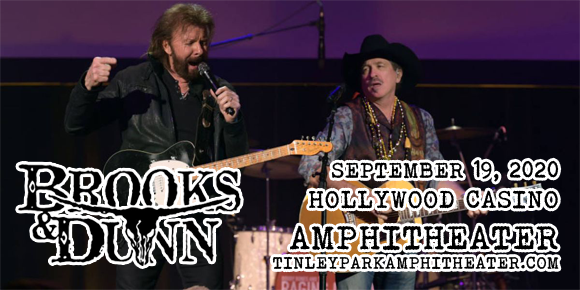 In 1990, at the suggestion of Nashville-based music executive Tim DuBois, former solo artists Kix Brooks and Ronnie Dunn (both vocalists and songwriters) came together to form the country music duo Brooks & Dunn. Signing a contract with Arista Nashville the following year, they found instant success with their debut single "Brand New Man," which was released that June and topped the Hot Country Songs chart. "Brand New Man" was the first of 50 singles that Brooks and Dunn have released throughout their career, and the first of 20 number ones on the Hot Country Songs chart. An additional 19 of the pair's singles have reached the top 10 on the chart, making 39 top 10 hits overall. "My Maria" (a cover of the B.W. Stevenson song) and "Ain't Nothing 'bout You", two of the duo's number one hits, were named by Billboard as the top country songs of 1996 and 2001 respectively. Brooks & Dunn have also enjoyed huge success with their albums – with the exception of only two of their albums, they have all been certified platinum or higher by the RIAA. 2009 saw the duo retire from music, but in 2015 they came together again to join with country star Reba McEntire for a Las Vegas residency. Among many other honors and accolades, Brooks & Dunn have won the Grammy Award for Best Country Performance by a Duo or Group with Vocal twice, and in 2019, they were inducted into the Country Music Hall of Fame.