Responsible for the line-dance craze of the 1990s, Brooks and Dunn are country music's most iconic duo and this summer they're finally back on the road together for the first time in 10 years! The highly-awarded pair will be box-stepping their way to Hollywood Casino Amphitheatre on Saturday 18th September 2021 as part of the Reboot Tour 2021 (postponed from 2020 due to the COVID-19 pandemic) and have they got one hell of a show in store for fans! The Country Music Hall of Fame inductees will be performing a headline set chock full of hits and will be bringing Travis Tritt and Elvie Shane along for the ride as support acts for te night! 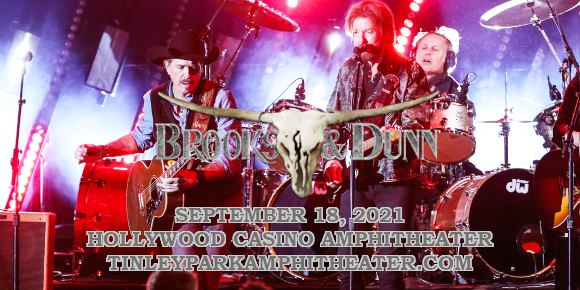 Kix Brooks and Ronnie Dunn were both enjoying success as solo artists when Nashville-based record industry executive Tim DuBois recommended they pool their talents. As a result, country music outfit Brooks and Dunn was formed in 1990, beginning several decades as one of the best-selling duos of all time. Their 11 studio albums have given the twosome 50 singles – 20 of which went to number one on the Hot Country Songs charts and another 19 of which reached top 10, including "My Maria" (a cover of the B.W. Stevenson song) and "Ain't Nothing 'bout You", which were the top country songs of 1996 and 2001, respectively. They have charted nine platinum or higher albums, and their 1991 debut album Brand new Man has now been certified six-times platinum by the RIAA. The duo has accepted numerous awards throughout their career, including 17 Country Music Association awards, 26 Academy of Country Music awards and two Grammy Awards. Despite announcing their retirement in 2009, the pair reunited in 2015 and have been touring and recording together on and off ever since.