Breaking Benjamin's headlining summer tour will be hitting up Hollywood Casino Ampitheatre on Wednesday 4th September 2019! The unstoppable hard rock act will be performing in support of 2018's Ember, their sixth studio album, busting out tracks like their number one hit single "Torn in Two"! The band will be joined in support by Diamante and Dorothy, and fans can also access the show as part of the 2019 Ticket To Rock promotion! 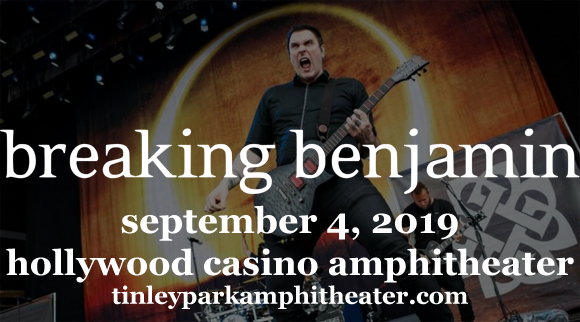 American rock band Breaking Benjamin has released three RIAA-certified platinum records and two gold records throughout its career, as well as two multi-platinum, two platinum, and five gold-certified singles. The group's career began in Wilkes-Barre, Pennsylvania in 1999, and the band made its major-label debut three years later with Saturate (2002). Their mainstream breakthrough came in 2004 with the release of We Are Not Alone, which was co-written with Smashing Pumpkins' Billy Corgan and peaked at number 20 on the Billboard 200. Two top five albums followed, before the band's subsequent hiatus from 2010 – 2015, and their triumphant return with the number one album Dark Before Dawn (2015). To date, the band has sold over 7 million units. Breaking Benjamin's most recent release is 2018's Ember.