Fresh from their co-headliner tour with Korn, rock giants Breaking Benjamin are coming to Hollywood Casino Amphitheatre on Thursday 6th August 2020 in support of last year's release, Aurora, which saw the band breathing fresh life into their tracks by exploring new acoustic arrangements of some of their biggest hits! The band will be joined by an unbelievable support line-up, with special guests Bush, plus Canadian rockers Theory of a Deadman, Candian-American rock supergroup Saint Asonia and outlaw country artist Cory Marks! 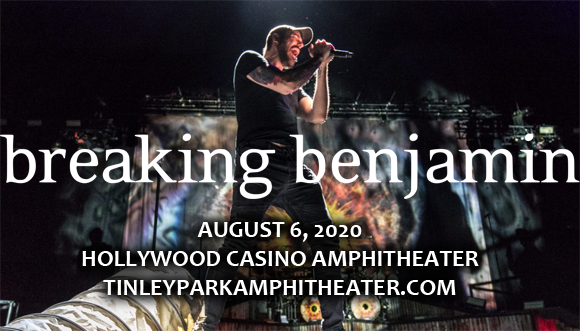 Helmed by lead singer and principal songwriter Benjamin Burnley, who has remained the only consistent member since its inception, American rock band Breaking Benjamin was formed in Wilkes-Barre, Pennsylvania in 1999. Since its inception, the band has become one of the most successful hard rock bands out there, with three RIAA-certified platinum records and two gold records, and two multi-platinum, two platinum, and five gold-certified singles. The group made its debut in 2002 with Saturate, which reached number two on the Billboard Heatseekers Chart and launched three singles: "Polyamorous", "Skin", and "Medicate". Three of the band's six studio albums have hit the top spot on the US Rock Albums Chart, with three reaching number one on the US Alternative Albums Chart, and 2015's Dark Before Dawn (their first release after a five-year hiatus) reaching number-one on the Billboard 200. The band has sold over 7 million units to date. Its most recent release is Aurora (2019) – an album of reimagined versions of the band's existing songs, consisting of mostly acoustic tracks.