Are you ready to welcome one of rock n’ roll’s greatest living legends to the stage!? That’s right, Alice Cooper returns once more in 2019 with the “Ol’ Black Eyes Is Back,” tour with Halestorm and special support from Motionless In White!! This incredible lineup is headed to the Hollywood Casino Ampitheatre on Sunday 21st July 2019 – fans are gonna scramble to get tickets, so beat the rush and get yours NOW, while stocks last!! 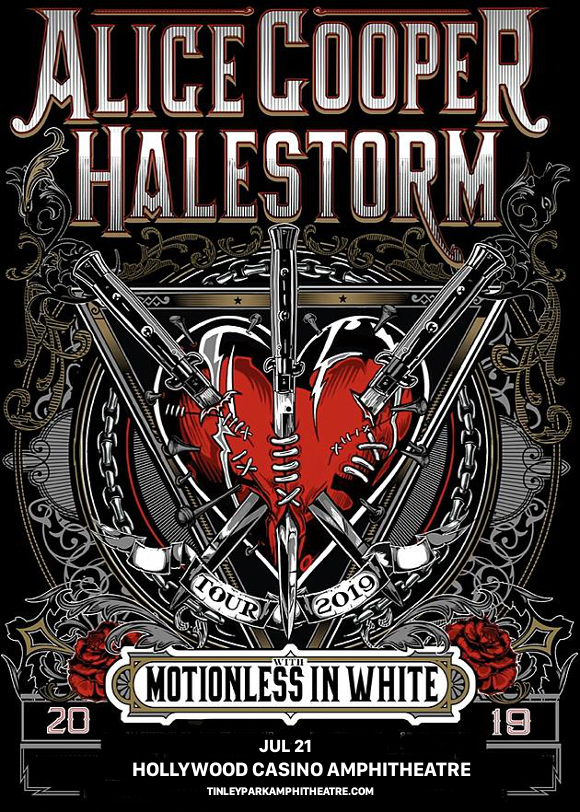 He’s been around since the late 60s, and still going strong – rock n’ roll’s best loved name, the legendary Alice Cooper!! Gaining a reputation for his highly theatrical and macabre live shows, featuring props such as guillotines, fake blood, and extravagant costumes, in addition to his series of smash hit records, he’s also well-known offstage for his witty personality and radio show; “Nights With Alice Cooper”.

Although fans can, of course, expect to hear hits like “Poison,” and “Schools Out,” in concert, even more new material from Alice is expected to be out before the tour begins – as if the tour itself wasn’t enough to look forward to!! As for Halestorm, they released “Vicious,” described by Rolling Stone as a “muscular, adventurous, and especially relevant rock record” that earned the band their second nomination for a Grammy Award. Opener Motionless In White continue to tour with their 2017 album “Graveyard Shift,” featuring a collaboration with Korn frontman Jonathan Davis.

Well, don’t just read about it – grab those tickets and get ready to experience the ferocity of Alice Cooper, Halestorm and Motionless In White’s live performance for yourself!!