The "Queen of Alt-Rock Angst" Alanis Morissette has announced her unmissable tour for 2021 and it's an extra special one than ever seen before as she brings her biggest, much loved album to the live stage. That's right, Alanis will be performing tracks from Jagged Little Pill as she marks 25 years since its release! Secure your tickets for Hollywood Casino Amphitheatre on Saturday 11th September 2021! 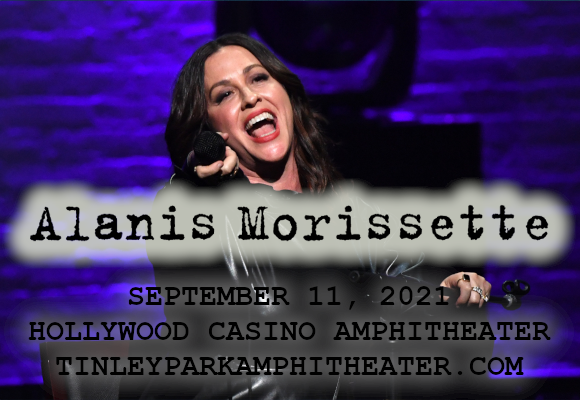 With incredible chart topping sales, Alanis Morissette has become one of the biggest stars from the 1990's. Known best for her out of this world vocal range and unique tone, her voice has become iconic. With her career spanning over the past almost three decades, this powerful artist has spread her music far and wide across the world and is much loved in the US and countries around the globe.

Her debut album Jagged Little Pill, topped the charts with its release back in 1995 and has become an unforgettable release, still frequently played today. As this album is truly the record that made her, Alanis Morissette plans to head out on tour for 2021 in celebration of an impressive 25 years since it was first released.

Come and show your love and support for the flawless artist as she hits the road for the summer and brings her show stopping performance to the Hollywood Casino Amphitheatre stage! Expect to hear all of your favorite Alanis Morissette songs as there's no doubt in mind she will be playing them all! Get ready by booking tickets online today.