This summer, you can get down to two of the grooviest, most highly-awarded, and best-selling bands of all time with a co-headlining tour that will blow you away! Iconic, trailblazing fusion bands Santana & Earth, Wind and Fire have teamed up to bring an unforgettable show to fans on the Miraculous Supernatural Tour, which comes to Hollywood Casino Amphitheatre on Saturday 2nd July 2022 (Rescheduled from Saturday 3rd July 2021)! Both groups are known for their out-of-this-world live shows, so the chance to see them together is one that mustn't be missed!

“We are excited to rock the USA alongside our friend Carlos Santana and his band with their off-the-chart musicianship and high energy show,” said EWF lead vocalist Philip Bailey. “We‘re going to bring the mighty elements of the universe to the stage and take fans on a journey they’ll never forget. This is gonna be a blast!” 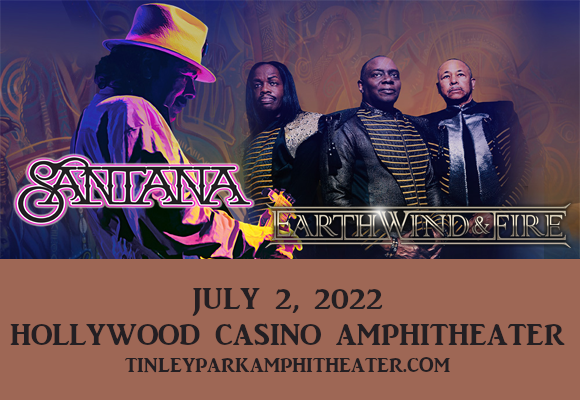 Rising from the ashes of a previous band called The Salty Peppers, Earth, Wind and Fire was formed in Chicago in 1969 by Maurice White. The band had instant success with its self-titled debut album, which was released in 1971 and charted at number 24 on the Billboard 200. This was just the beginning of a career of incredible accomplishment and popularity for the band, who seamlessly traversed a variety of genres with their music, including R&B, soul, funk, jazz, disco, pop, rock, dance, Latin, and Afro-pop, creating an unparalleled musical legacy as they did so. To date, the band has sold over 90 million albums worldwide, making them one of the best-selling bands of all time. The group has won six Grammy Awards from 17 nominations and four American Music Awards from 12 nominations, and has been inducted into the Rock and Roll Hall of Fame, the Vocal Group Hall of Fame, the NAACP Image Award Hall of Fame, and Hollywood's Rockwalk, also receiving a star on the Hollywood Walk of Fame. Other honors that Earth, Wind and Fire has received include an ASCAP Rhythm & Soul Heritage Award, the BET Lifetime Achievement Award, and the Soul Train Legend Award, as well as a NARAS Signature Governor's Award, a Grammy Lifetime Achievement Award, the 2012 Congressional Horizon Award, and the Kennedy Center Honors in 2019.